Recently I became nostalgic and fascinated with stuff from the past, so I decided to create a Vagrantfile to work with FreeBSD1. Why FreeBSD? Because as a developer, I really like Docker and I started looking in the past to find its historical birth: in fact, as a concept, Docker is no so recent as you think, and I think it exists also because of the works of some other bigs from 80', such as Poul-Henning Kamp2. Starting from its work and using a FreeBSD installation I did some experiments with jails, to understand better what they really are, how they works - how can you create what it will look like a vintage container - and why you should use them in a FreeBSD environment - at least, to learn something new. 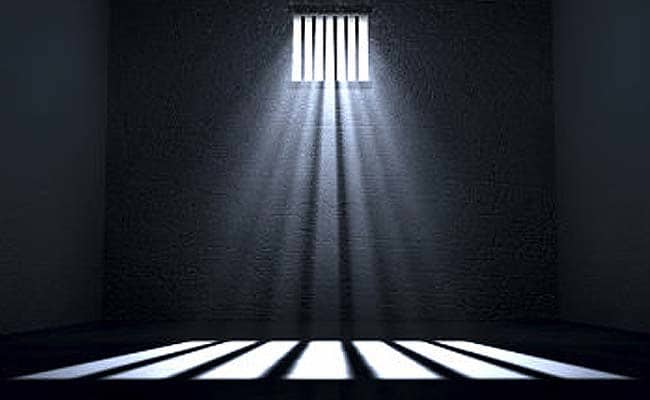 As P.H. Kamp says in its work, _FreeBSD's jail facility provides the ability to partition the operating system environment, while maintaining the simplicity of the UNIX root model_. I think its work is really clear, and I would like to follow logic steps behind its reasoning, but...wait: let's start from the problem.

The traditional UNIX access model assigns numeric uids to each user of the system. For the purposes of human convenience, uid 0 is canonically allocated to the root user. The system can discover whether special privileges are accorded to a process simply by looking at the uid of the process: if it is equal to 0, then the process is acting with super-user privileges. It's really simple, but there are a few problems.

It's easy to imagine how this scenario could collapse into a difficult dependencies graph that doesn't let the system to be secure at all. In particular, \(G\) itself says that many privileged operations in UNIX - even if seem independent - actually are not: instead, they are closely related and the handing out of one privilege may, in effect, be transitive to the many others. Let assume that users \(u_1\) and \(u_2\) have to be able to do \(p_1\) and \(p_2\), but no \(p_3\): then you can permit both to be root enabling them doing whetever they want - of course including \(p_3\), but also other \(p_s\) you want to disable for both the users. What does it means? It means that, if you have to assign different permits over the same operating system - some securelevel mechanism has to be implemented which allows the administrator to block certain configuration and management functions from being performed by root.

However, a system root-dependent is not a good idea, because if the root user is compromised, you're f***d up, and second, having a single administrative account is not a good idea, even in the simplest environment. There are some features in BSD system that provides - let me say - security capabilities: for instance, the single-user mode available to block certain functions until reboot. This is a great functionality but, it's not a solution yet to separate several root abilities. A simplest solution should be introducing new security features to split privileged operations, but this often involves introducing new security management APIs. Further, if we assume to introduce fine-grained capabilities to replace the setuid mechanism in UNIX-like operating systems, applications that previously did a check to see if they were running as root before executing must now be changed to know that they need not run as root. This is not a real solution.

A jail is characterized by four elements:

Jail permits to partition a FreeBSD environment (processes, file system, network resources) into a management environment, and optionally subset Jail environments. The administrator of a FreeBSD machine can partition the machine into separate jail and provide access to the super-user account in each of these without losing control of the over-all environment.

Looking for informations about how jails really work, I discovered that jails are foundamentally of two types: the "complete" jails, which resemble a real FreeBSD system, and the "service" ones, dedicated to one application or service, possibly running with privileges. Let's make an example of how you can create a jail.

After you create the environment inside the jail subtree, you can create a jail - in term of configure it.

To configure a jail, you have two options: first, use jail.conf file, a file structured with the format key = "value";. The short version of the story is that FreeBSD jails used to be defined in /etc/rc.conf using rc-style syntax. During FreeBSD 9.x, a new convention was introduced, using /etc/jail.conf. FreeBSD 10.x defaults to the new style but still supports the rc.conf style. FreeBSD 11 dropped support for the old style. Inspired by this short post, I got an simple but complete example of old style configuration:

If you remove everything from rc.conf except for the jail_enable line and move everything shared to the global scope to clean up the individual definitions, you got a new jail.conf file like the one below:

The second option is to use directly the jail command with parameters from command line. As the man page states, jail command recognizes two classes of parameters: four fixed parameters, the true jail parameters, that are passed to the kernel when the jail is created (which can be seen with jls and, for backward compatibility, can be passed without names: path, hostname, ip, and command), and the pseudo-parameters that are only used by jail itself.

So a jail may be specified with parameters directly on the command line. In this case,the jail.conf file will not be used. (And this is the part where you realize that jail utility is the docker daemon.)

Using service jail start $name you start the jail $name: if you don't specify the name all the jails defined in the /etc/jail.conf will be started. Using the stop statement you can stop the jail.

Using jls you can list the jails in your host. jexec 3 /etc/rc.shutdown

NOTE: you can also shotdown a jail using the jexec command: look at the JID's jail you want to stop using the listing command jls, then run jexec 3 /etc/rc.shutdown

If you to find out more about how the jail mechanism is implemented, you can have a look at this files4 /usr/src/usr.sbin/jail/jail.c, /usr/src/sys/kern/kern_jail. and /usr/include/sys/jail.h header file: in the latter is defined the jail structure, there is an entry for each of the arguments passed to the jail command, and indeed, they are set during its execution.

The jail facility provides FreeBSD with a conceptually simple security partitioning mechanism, allowing the delegation of administrative rights within virtual machine partitions. The implementation relies on restricting access within the jail environment to a well-defined subset of the overall host environment. This includes limiting interaction between processes, and to files, network resources, and privileged operations. Administrative overhead is reduced through avoiding fine-grained access control mechanisms, and maintaining a consistent administrative interface across partitions and the host environment. So...does it seem familiar? 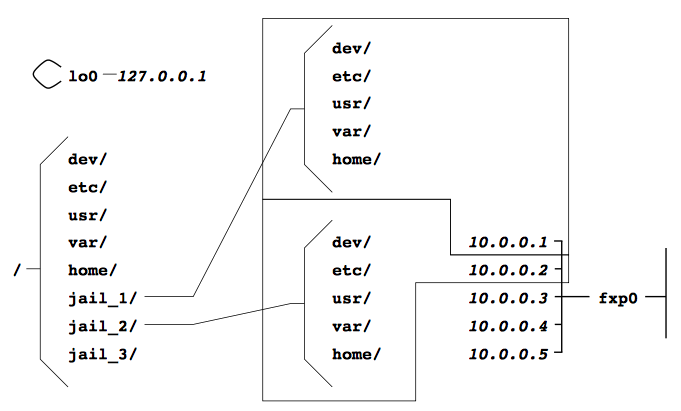 If something is wrong, please let me know, I'm still waiting for the world to be built -.-

PS: this is the part where you realize that a jail is similar to a container, the jail.conf is kind of a Dockerfile but - wait for it - could be so much more, like a docker compose: further, jexec looks like the docker exec command, and jls looks like docker ps -a, and so on, am I wrong?